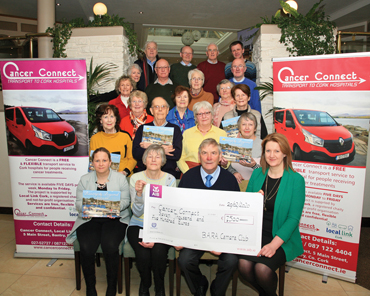 Bantry Active Retirement Association Camera Club recently (before lockdown!) presented the proceeds of their latest edition of the ‘Bantry and Beyond’ calendar to Cancer Connect. This was the 7th out of the last 8 years that they have supported Cancer Connect.  The other one being to West Cork Rural Transport, as it was then, now known as Local Link.  This presentation was also a special occasion since with the latest cheque they have exceeded €100,000 in total donations since they started.  Their first endeavour was in 2004 when the 2005 calendar was published under the title, “A Sense of Place” with €8,700 going to the Friends of Bantry Hospital.  This was the largest amount donated, followed by the most recent sum of €7500.

In 2005, the group published a book, “West Cork, A Place Apart”.   From then on, it was calendars all the way, with titles such as “Beautiful Bantry”, “Round and About Bantry” until in 2013, the title of “Bantry and Beyond” was first used for the 2014 calendar.  Eileen O’Leary suggested the creation of a brand with this name and in subsequent years, this title has been used.

Eileen O’Leary has been the club’s guide and mentor from the start, as all but one of their productions have been with her guidance.  The exception is this year’s calendar, which was produced with Dierdre Fitzgerald’s help.   Her successor, Andy Gibson, is helping and encouraging the group towards a 2021 calendar.

Of course, taking the photographs for a calendar and getting it printed is only part of the exercise.  The calendars have to be sold to raise the money that can then be donated.  For this part of the process the club is, as usual, indebted to the shopkeepers and organisations around ‘Bantry and Beyond’ who take the calendars and, without any benefit to themselves, sell our product for a charity.  It would take too long to list them all but they should know that the club is very grateful for their support and also, of course, the people who buy the calendars.   When the club started many years ago they more or less had it their own way, but the competition has got fiercer, with a number of organisation making calendars available towards the end of the year.  However, the club believes that it has a premium produce which sells on quality, not price – a price of €10 which has not changed since 2004.