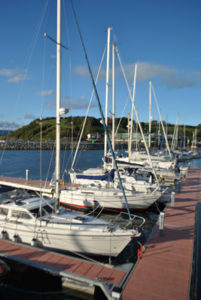 As the crowds gathered for the official opening of the new Bantry Bay Marina, there was a buzz of excitement around town, already thronged with market go-ers on one of the busiest Fridays of the year. Festival banners flapped in the breeze to remind everyone that this was a “significant” weekend. Down at the marina, already full of visiting boats, flags fluttered and masts tinkled. Inside the marquee, the invited guests gathered and the sense of occasion was tangible – best dresses and suits were evident among the visiting sailing fraternity, as the dignitaries gathered for the formalities and prepared to kick off the festivities for the weekend.

There is an increasing sense of optimism and positivity in the air in Bantry at the moment; the opening of the marina is the latest in a series of developments that seem to suggest that Bantry’s fortunes are on the turn. After many years of uncertainty, disagreements and demands for a new supermarket, Lidl will finally open its doors at the new site in Newtown before the end of the year, and Supervalu will open its new, improved and bigger store with (hopefully) ample parking not long after. A new arts centre is being proposed to house West Cork Music and although the site is yet to be confirmed, it is thought that it will be in the vicinity of Harbour View.

All this against the backdrop of the Wild Atlantic Way; a gift of pure genius on the part of Failte Ireland that has seen visitor numbers to West Cork, and Bantry, soar in the last three years. So far in 2017 over 10,000 visitors have passed through the doors of the tourist office, and is increasing year on year. This year eight cruise liners will visit West Cork, and the increased draught in the harbour after dredging means that some will be able to berth in the marina itself, bringing a further increase in visitors to the town.

And the business community is rolling with it. A stroll through Bantry on a Sunday afternoon now sees people sitting in the sunshine outside bars and cafés, and wandering leisurely around the shops. The new street furniture and colourful floral displays on the Square are inviting visitors to sit and linger a while. New businesses are appearing, and established businesses are brightening up their premises to attract the influx of summer trade. Bantry is definitely open for business and the future is looking bright.

A LOT DONE BUT MORE TO DO 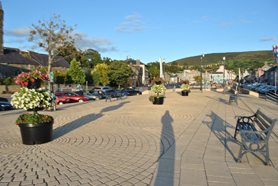 But what of the empty premises? The unfinished development at Vickery’s Hotel and Supervalu’s move to the harbour will leave a large hole in the centre of town that threatens to undermine the progress being made. Dr Denis Cotter has recently called for a proper town development plan to address this issue. There is a very real concern that with the two supermarkets located at opposite ends of the town, the centre may lose its lifeblood, and that traffic congestion, particularly at the harbour end, could strangle the town. It’s vital that with all the progress that is being made, we don’t take one step forward and two steps back.
To really build on the momentum that is gathering with new developments and the new marina, much more still needs to be done. When the construction workers leave the Marina, there will still be two areas to be developed; the so-called “green area” opposite the Marina, in front of the new Supervalu, and the old “slob” that lies between the Marina and the town. As it currently stands, there are no fixed plans in place for either of these two areas. Cork County Council will take control of the green area, and the slob is, well it’s the slob. Nobody has a claim on it, and nobody seems really to want it. Both areas are currently the missing pieces of a jigsaw that, when finished, would make the final picture magnificent. 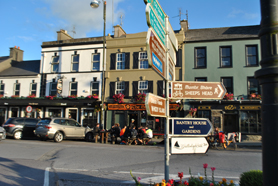 CALL TO ACTION FOR BANTRY
A busy marine area and a thriving supermarket trade at both ends of the town means that the centre will need to find its own identity, to make sure that footfall doesn’t drift away. The Square is an inviting space that draws the eye from the harbour towards the town and begs the visitor to explore it and the network of smaller shops and cafés beyond it. New businesses looking to open up in Bantry need to feel confident of success, and to that end steps must be taken to ensure the life of the town centre. Improvements to footpaths, parking and building frontages will all help to bring a vibrancy to the area, and large empty premises must not be allowed to stand empty for long. The potential to keep Bantry’s fortunes moving in the right direction is there, and Dr Cotter’s call to action is on target, and timely.
Representatives of The Port of Cork have assured us many times that the new marina represents only the first phase of the development of Bantry’s harbour, and Cork County Council tell us they are committed to supporting more projects like this. Let’s hope then, that they are listening to the call for a town plan, and let’s look forward with optimism to the next phase. With essential road works scheduled to repair the culvert running underneath the town, now seems to be the perfect time to put that plan in place.

In the meantime, let us take a moment to remember that old sea dog, Bill O’Donnell, one of Bantry’s best loved characters, who first envisaged a marina for Bantry many years ago. Sadly, he didn’t get to see it in his lifetime, but how delighted would he be to see the sailing boats and yachts bobbing up and down in their new berths, and the bay alive with marine activity. What a legacy to leave the town he loved so well.