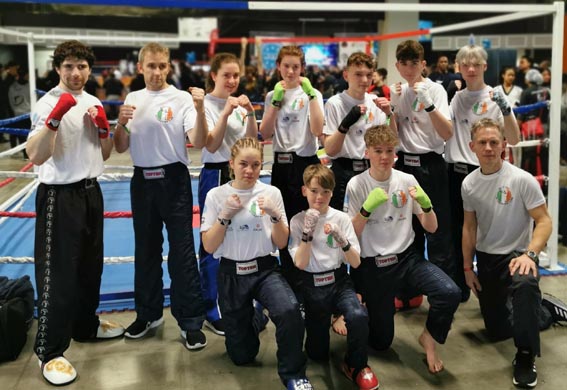 An 11 strong team from the West Cork Kickboxing Club, along with head coach Ian Kingston, coach Tony Stephenson, and international referee Mike Stephenson, recently travelled to Citywest Hotel in Dublin for the largest, and most prestigious martial arts tournament in the world: The Irish Open International. Over 3500 competitors from all over the world took part in the competition and West Cork did not disappoint. Some fantastic matches were had over the weekend with the club bringing home 2 silver medals, and 4 bronze medals for their efforts.
All the team, seniors and Juniors fought extremely well doing West Cork proud.
Dee Begley and Luca Rozsa both brought home silver medals for their nail-biting finals. Bronze medals went to Hannah Green, Luca Rozsa, Mike Fogarty Lithgow and Michael Collins.
Also representing the club were Ian Hurley, Deirdre Connolly, Cian Collins, Dylan Green, Anthony Cronin and 10 year old Evan Collins.
Coaches Kingston and Stephenson were thrilled with everyone’s performances over the weekend and now concentrate on preparing their athletes for the Irish National Championships. The best fighters from the county will compete for a national title and a coveted place on the Irish kickboxing team.
The continued success of the club’s junior athletes is helped hugely by our junior team sponsors, Calor Gas, Laide and O Brien and The Brick Oven