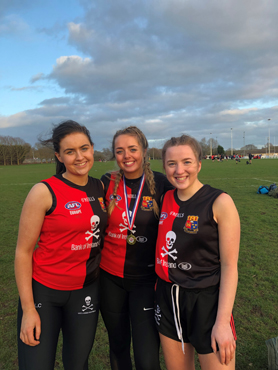 The UCC Crusaders team succumbed to a last minute score against Cambridge, following three successive wins in their group stage. The West Cork football stars played huge roles in the strong run enjoyed by UCC Crusaders. Lucy really enjoyed the experience of playing AFL. “It was fantastic. It was an amazing experience to get to play against all these different universities. The set up was fantastic and the tournament was really well organised,” declared the ace footballer.

Rachel who has won minor All-Ireland championship titles with Cork in recent years, was delighted to play her part in their run to the final. UCC Crusaders defeated Cambridge earlier in the tournament, but they ultimately succumbed by one point to Cambridge in the final. “We won our first three games. We really got into it from the start beating Oxford on their home ground, Cambridge and Birmingham. We came up against Cambridge in the final again. They were a very physical team and we lost by a single point. It was very disappointing because we had beaten them earlier in the day. Overall we were happy with how the tournament went and our trainer Mike was very proud of us.”

Rachel ended the tournament by being named Player of the Tournament following a series of brilliant displays. The Bantry native was delighted with the accolade. “I was delighted to be named as the player of the tournament. I did not expect it at all, but it was an honour to get it in my first AFL tournament. It was a pleasure representing UCC Crusaders abroad with the whole team. It was a great experience. We were a relatively young and inexperienced team. We were unlucky to not come back with the win, but we really enjoyed the weekend.”

Lucy who has also won minor All-Ireland titles with the Rebelettes, was proud of the contribution Rachel made to the UCC Crusaders AFL team. “She deserved it as she played so well throughout the tournament. She’s obviously a brilliant GAA player, so it is no surprise that she would be the same in AFL. She played fantastic and the award was really well deserved.”

Lucy who helped the Cork footballers win the U21 Munster Championship title last year only took up playing AFL recently. She instantly loved the game and especially the physicality of the high-octane and intense sport. “It is really enjoyable. I think having the football background is a major plus as it’s not too difficult a sport to pick up then. It’s a lot tougher in terms of physicality. It was interesting to get used to the tackles, which probably forces you to think a bit quicker than you would in football.”

Rachel agrees with her club colleague with regards her love of AFL and especially the physical nature of the sport. The football ace always wanted to play AFL and following an open day trial, she instantly fell in love with the sport. “AFL is a much more physical game than what I’m used to with GAA. I quickly got used to it and I really enjoyed it. Football is a huge asset when playing, especially just the basic skills of catching high balls for the mark or kicking accurately for a score. My body is much sorer than what I’m used to after a match, but it was an amazing experience. It is a great sport to play. I always wanted to try it out and when I went to the club open day I just signed up. I went to a few training sessions, but it was hard to make it too often because of clashes with UCC football.”

Due to the global outbreak of Covid-19, all sporting activities have been postponed for the foreseeable future. If the relevant authorities give the go ahead for competitive sporting action to resume in the coming months, Rachel will be delighted to link up with her Bantry Blues and the West Cork senior football team-mates once again. “We have a talented squad, so hopefully we can enjoy a strong club season. It will also be great to be back with West Cork. It is a great honour to represent the divisional side.”

A number of Rachel’s club colleagues with both Bantry and West Cork have enjoyed great success with the Cork senior ladies team in recent seasons. Emma Spillane, Libby Coppinger, Martina O’Brien and Laura O’Mahony all helped the Rebelettes enjoy national league honours last year. Rachel is very proud of their progress to date. “The West Cork girls are doing great with the senior team. It is very pleasing. The recognition the ladies are beginning to get is well deserved. They are great role models and ambassadors.”